Jesus leaves us a lasting legacy. The scripture to guide us and the Holy Spirit as our advocate. We are not left alone!
This sermon is quite a bit different from how it was written, therefore, please listen to the sermon rather than read it.  The sermon notes which are included for convenience.

May the words of my mouth and the mediations of my heart be acceptable to you, Lord, my rock and my redeemer.  Amen.

We are with the disciples as Jesus looks to heaven and prays to God the Father, this wonderful, beautiful prayer of Jesus.

This prayer takes place at the end of the last meal he has with his disciple while in the world of the living. It is the final wish of Jesus for the people with whom he has come to be friends, who know him as Messiah but also view him as teacher, and intimately as their companion.  They are already coming to realize that something is coming and their world is going to be irrevocably changed, whether or not every one of them believe him when he tells them he will be going from them very soon. 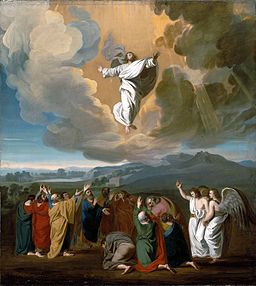 And now he makes his deepest wish known to them as he speaks to the God that he has taught them about, the one true God of Israel and all of the world. Jesus prays in no uncertain terms, first reminding his listeners, because God already knows, that Jesus was sent from God, and that the work that Jesus does is in God’s name. And then Jesus prays God will protect his followers and that they will live together in unity.

Very simply, all of the words of this Gospel points to that one phrase at the end, “Holy Father, protect them in your name that you have given me, so that they may be one, as we are one.”

And with this the memory of prayer in our hearts, we may finally celebrate the culmination of the great Easter, that time when Jesus is no longer physically concentrated in the world around him, appearing in visions to the people who loved him, Mary and Mary, Susannah, and Joanna, Peter and John, Cleopas and the other one, the remainder of the twelve except for Thomas, and then Thomas, and all of those who would see Jesus and continue learning from him. Now we begin to understand that the work that happens on behalf of Jesus in the world is the work of the Holy Spirit, for Jesus has ascended, and now reigns over us. Indeed, this beautiful prayer of Jesus is intended for the world of his followers after his ascension, that is so vividly described in our Acts reading, lifted up into a cloud and taken from their sight.

And even then they continue to stare, while two angels appear to tell the men who are gazing after their friend and savior that Jesus is not now restoring the kingdom of Israel, but will do so at a time and place unknown to all. And there began the great wait. And while we, in the 21st century, understand that the return of Jesus does not take place in time of a single generation or even fifty generations, the disciples who lived in the beginning times were more anxious about the imminent return than we (for the most part) are today. Jesus promised to come again, and they were certain they would see it. How would they even relate to know that Jesus meant the end times would go on and on and on until long past when their lives and memories would be words on ancient scrolls?

What do you do when you are going to leave people you care about to their own fate? How do you address the concerns and well being of them? Back in the 90s, when I lived in Florida, I worked for a bank trust department, an institution whose chief function was to invest funds properly for accounts that had been set up by people who wanted to ensure that the people they left behind were well cared for. Sometimes this meant people that parents or other guardians were certain that were unable to care for their own selves, either through mental impairment or chemical dependency or other things that otherwise would effect the diminishment of hard-earned currency of those who left them. And so funds would be doled out in the hands of a trustee, someone who is what we say has a fiduciary responsibility to the well-being of the beneficiary. But it was always human. Humans wrote these wills and trusts with their own agendas, and their own preconceptions of what their beneficiaries would require, which would not always be to the best interest of them, and of course the beneficiaries were always human as well. They, more often than not, wanted or needed their money sooner rather than later, and depending on the terms would be able to access more of the principal than would keep it going for a long time.

But the trustees were always human too, and while some had the beneficiary’s interest at heart, others were less concerned with their well-being. The bank was staffed by humans. The attorneys who drafted the documents were human. In other words, the world of trust banking was less than perfect, and even when the best of people tried to follow the documents to the letter of the law, it is impossible to get in the head to understand the intent of deceased grantors when seeing to the needs of those they left behind.

It’s the same way with us in the church, when we have been given a financial reprieve as beneficiary of estates left to us, that we continue the legacy of those who left them while at the same time doing the best work of the church today. But we are not perfect nor are we always the most responsible with the funds. I doubt that any church is. But we do work hard at deciding how money is to be apportioned and do try to make sure that the work that we do is done in the name of Jesus Christ and not to our own glory.

Because the legacy that Jesus leaves leaves us more clarity. We know as he prays for us he prays for protection by God and unity with each other. We know that the work Jesus calls us to do in the world is done in his name, and we have the commandments that he left us with to follow. That we act in accordance with love of one another and that we continue to love God and speak to God in prayer.  That we do the good work that we do in his name, in order to first glorify God before anything else. We serve God’s holy kingdom in all that we do.

What is it like to know that someone is praying for you? How does it feel to know that we are in the intimate conversation that someone is having with God.  How much greater it is to know exactly what that person is praying for us. Particularly in the case of Jesus, who is just about to leave the disciples, the words that he says to God the father, that in their hearing are even that more meaningful.  Jesus asks God they know eternal life, and what is eternal life? That they may know the only true God, and Jesus Christ whom God sent to them.

Sisters and brothers, the good news is that our lives today continue to reflect this prayer that Jesus had for his disciples, the prayer that Jesus asked for us. His legacy on earth is protected by God, and God’s agent on earth, God’s trustee, the Holy Spirit keeps us together in unity as the body of Christ, the church on earth. And we ourselves are trustees of the legacy of Jesus, giving of ourselves to ensure that the word of God is fulfilled on earth.  The promise of Jesus is alive. We know eternal life because God is with is. We are God’s people, both responsible for the care of God’s legacy and ourselves, under God’s care, entrusted to the Holy Spirit the legacy of Christ on earth, today.

This site uses Akismet to reduce spam. Learn how your comment data is processed.